Vancouver, B.C. – Vital Battery Metals Inc. (“Vital” or the “Company”) (CSE: VBAM), is pleased to announce that the Company has entered into an option agreement (the “Agreement”) to acquire 100% interest in the Sting Copper Project (the “Project”) located 14 km south of the town of Trout River in the province of Newfoundland. The Project consists of five mineral licences and cumulatively encompasses a land area of approximately 30.6 km².

Adrian Lamoureux, President & Chief Executive Officer of Vital, commented: “We are thrilled to have been able to acquire such a prospective project in Newfoundland. The fact that this area has so many underexplored historical mineral occurrences and has seen limited drilling boasts exciting prospects of potential discovery. Being located along a trend of such strong projects such as the York Harbour project, we are surprised that this area has been overlooked in the past. The Company looks forward to working towards an extensive drilling and exploration program in the coming months.” 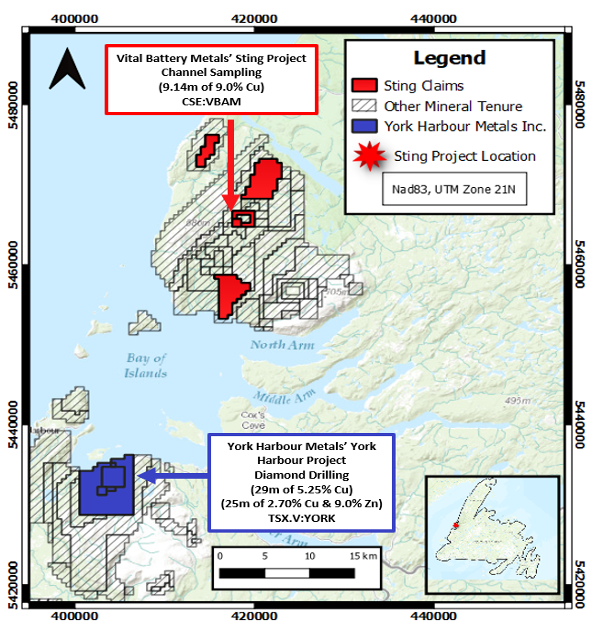 Chip and channel sampling completed in 1922 was briefly described as being composed mineralogically of chalcopyrite, chalcocite, pyrite and quartz over an area of approximately 30.5m by 12.1m. Highlights of sampling done in 1922 can be seen in the following table:

Another significant historic mineral occurrence documented by the Government of Newfoundland and Labrador’s Mineral Occurrence Database and located 450 metres to the north of Jumbo on the Project is the Red Lode occurrence. The Red Lode occurrence is visible at surface and was also chip and channel sampled in 1922. It returned 1.82 meters of 1.30% and 2.40% copper respectively (Gregory River Copper Deposits, Reid Newfoundland Co 1922., MODS 012G/08/0002).

In addition to the Jumbo and Red Lode mineral occurrences there are over 40 other mineralized showings that can be seen along the Gregory River Fault that have not been adequately sampled or drill tested. The recent diamond drilling success at York Harbour Metals’ York Harbour Project located 27 kilometers to the south and along strike proves that the area has significant potential and validates that more detailed geological work is warranted.

Under the terms of the Agreement, the Company may acquire a 100% interest in the Project by paying the optionors under the Agreement (the “Optionors”) a total of CAD $90,000 and issuing a total of 5,000,000 common shares in the capital of the Company (the “Shares”) in accordance with the following schedule:

In addition, the Company must incur the following exploration expenditures on the Project:

(A) $250,000 on or before the one-year anniversary of signing the Agreement; and

(B) Additional expenditures of $375,000 on or before the two-year anniversary of signing the Agreement.

The Optionors shall retain a 2% net smelter returns royalty on the Project, of which the Company may purchase at any time one-half, being 1% for a price of $1,500,000.

Nicholas Rodway, P.Geo, is an independent consultant and a qualified person as defined by National Instrument 43-101. Mr. Rodway supervised the preparation of the technical information in this news release.

All MODS data referenced above can be sourced at the following Newfoundland and Labrador web link: https://gis.geosurv.gov.nl.ca/

Vital Battery Metals Inc. (CSE: VBAM) is a mineral exploration company dedicated to the development of strategic projects comprising of battery, base and precious metals in stable jurisdictions. The Company is working to advance its Sting Copper Project and its Vent Copper-Gold project.

On Behalf of the Board of Directors

The CSE does not accept responsibility for the adequacy or accuracy of this release.

Vital Battery Metals Announces Additional Exploration Results, Including a Grab Sample of 14.2% Copper at its Sting Copper Project in Newfoundland

Enter your details in the form to sign up for our News Alerts.